One of the main lessons learned when implementing blockchain technology is the need to develop basic blockchain infrastructure in a cooperative manner with other participants, regardless of whether the technology used is Hyperledger, Ethereum or any other.

How Blockchain is changing the World

Blockchain technology has the potential to transform centralised economic models which rely upon a trusted third party to supervise and guarantee operations between different parties, certifying that each operation has taken place (for example, payments in banks or property registers). Blockchain allows greater traceability for these types of operations as it uses an immutable database with each of the parties having a copy.

Using Blockchain dispenses with the need for trusted third parties, creating a decentralised model between the participants of an ecosystem.  The participants place their trust in the blockchain network itself as a common source of truth which the participants can access to verify the status of an operation. The greater the number of participants, the more secure and stable the network is, as there will be a greater number of copies of the database.

The greatest benefit offered by blockchain is the creation of a network of trust between the parties. Accordingly, it makes more sense when different agents of the value chain participate (including customers, suppliers or even competitors). For example, Bitcoin generates a network of trust between private individuals allowing them to view all the transactions of the network and determine the funds being transferred from one account to another without the need for a central authority. However, it is precisely the decentralised nature of blockchain which poses the main barrier for its adoption as a technology.

Although this technology first appeared in 2008 when it was used by Bitcoin, major companies, including Santander Bank, began to experiment with this technology as from 2014, using internal prototypes involving a very limited number of participants. One of the first lessons learned was precisely the need to involve various participants of the ecosystem in the prototypes.

👉 Want to know who invented Blockchain and when was it developed? Read this post: Bitcoin and Blockchain, invented anonimously from scratch?

The advantage of having various participants of the ecosystem from the outset is that it guarantees an adequate volume of operations to make better use of the infrastructure and facilitates a network effect which attracts more participants.

However, many entities are reluctant to participate in Blockchain ecosystems in their embryonic stages, until they can actually see the ecosystem functioning and the advantages it can offer. This is one of the main obstacles to the implementation of Blockchain technology. Does it sound similar to the chicken-and-egg theory?

Blockchain consortium as a cooperative model

The model currently preferred for incorporation of participants is the creation of a consortium of companies. A consortium is a grouping of companies that cooperate for the development and operation of basic Blockchain infrastructure and services, which are then used by the participants to develop their own range of services.

Although the basis for these consortia is technical, in order to demonstrate the viability of the use of blockchain for a specific use case and the creation and management of basic infrastructure, the key to their success is to develop other work areas beyond the technological sphere.

One of the major contributions of a consortium is the availability of an independent project management office which is responsible for setting milestones for the participants and monitoring the progress made.

Another key lines of work are:

Another important aspect is the dedication and targets of the human resources assigned to the consortium. It is essential to have exclusive dedication with specific targets that have an impact on performance evaluation, or in their absence the start-up of the consortium may be subcontracted to an independent supplier. Partial assignment of voluntary resources has proven to be an error. Inevitably, the participants that make the most effort at the start end up reducing their input due to the negative influence of the participants who put less effort in.

A good example of the consortium approach is the case of Libra, the new cryptocurrency promoted by Facebook. The first step of this project involved creation of a non-profit organisation with its own employees.

In Santander, we do participate in various international consortiums that have their own legal identity:

Fnality is a consortium of 14 international banks responsible for launching a Blockchain network for funds exchange among financial entities, backed up by fiat money deposited in the accounts of central banks.

We are also members of We.trade consortium, a joint venture between 12 banks which aims to establish a digital platform based on Blockchain for international commercial transactions.

We are also founding members of consortia that aim to promote this technology across different sectors. Examples include Alastria, an association of companies which developed the world’s first multi-industry blockchain network, and Ethereum Enterprise Alliance, a non-profit organisation that aims to promote the use of blockchain by companies.

In Spain, we are working with the Comisión Nacional del Mercado de Valores (CNMV), Bolsa y Mercados Españoles (BME) and other Spanish banks to test the use of this technology to simplify processes and reduce the time taken to issue warrants.

To sum up, the creation of blockchain consortia is vital for the adoption of this technology, given that on the one hand it helps to generate a network effect that attracts further participants to this new type of ecosystem and infrastructure, and on the other hand it serves as a vehicle to professionalise the management of this type of infrastructure. 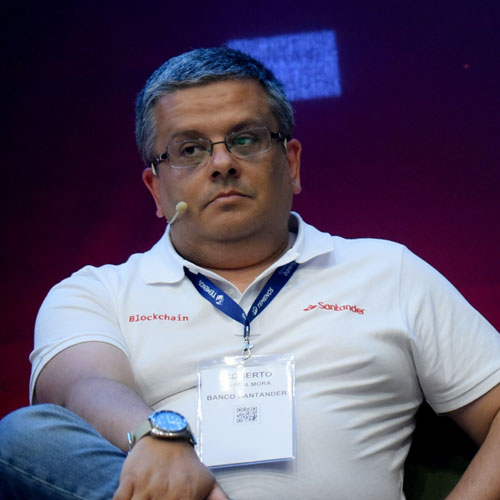 Evangelist, trainer and currently Blockchain architecture Head manager at Santander Global Tech. Learning other emerging technologies and passionated about new ones and their impact on society.

Artificial Intelligence
How to Teach a Bot to Talk: with Examples